Even yesterday, I got a question from a TipsRing Reader, as following,

Hello Sir, I saw a friend’s wall post that an app can track the Facebook Profile visitors. Is it possible to track the visitors or views on your Facebook profile?

As per the Facebook FAQ, it is clearly mentioned that it’s impossible to find the profile visitors or viewers. Any application which does that, will not be accepted by the Facebook, because it is against their Terms of Service. Facebook FAQ states as following, 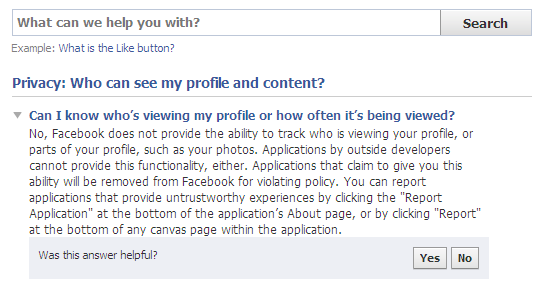 So whenever you get any posts on your facebook wall, or some message about some Facebook application which can track the profile visitors and viewers, remember that they are spam, which are generated automatically from a Facebook profile.

When we click those links or apps and add them to our facebook profile, the same status automatically gets posted on our wall, which makes our friends vulnerable to it. Read how to stay away from the malicious and rogue facebook applications.

Moral: It is impossible to track, who has viewed or visited our Facebook Account / Profile, so don’t waste your time in looking for some application or method which could do that. In case you already added some scam Facebook app or clicked on any scam link, then to prevent further damage you must remove that facebook application from the Facebook account(s) as soon as possible.

Ever wanted to check the genuineness of any credit card number ?

Well, you can easily verify the genuineness of any credit card number, by using a simple math,

The credit card numbers are not randomly selected, but it follows a specific rule named (Luhn algorithm) which could be used to cross-check that whether a credit card is valid or not.

If final sum ends as zero, then it is a valid credit card number, otherwise it is fake.

You can also check the demo-interaction as provided below, which shows the detection of a fake credit-card by the simple method as I told above.

If you get some problem while understanding this method, then post it in comment-box provided below.

WordPress is widely famous for the best CMS (Content Management System), and now ExattoSoft had made a protection shield for it, which can protect the wordpress sites from plagiarists and content thieves.

Exattosoft launched this web-software in January 2010, and since then it has become a great choice for the wordpress lovers.
As per a survey, we found that WP Site Protector comes in the list of Top-5 WordPress Security Plugins.

When coming to the pricing, WP Site Protector Pro – Single Site License comes for just $30. However more versions of this application costs more. The 5-Sites License could be bought at $120, 10-Sites License for $210, while the unlimited sites license costs $600.

Inspite of being so powerful, WP Site Protector doesn’t require any special skills to install it on the websites.

To buy WP Site Protector, you can visit here at https://ways.exattosoft.com/products/exattosoft-wp-site-protector-plugin. After making the payments, you’ll receive an email confirming your purchased version. This email is sent from Exattosoft Support Team, which validates all requests, and then sends the purchased version to them via e-mail.

People often say that the most efficient method to remember birthday of your wife is to forget it.

The same happens with many of us. But from now onwards, you can make it sure that all of your Facebook friends automatically get the wishes for their birthdays, from your side.

A Facebook Application performs automatic birthday wishes by sending messages on your friends facebook walls. You will have to grant permissions to that application for performing it. If you are worried about time-zones, you can configure it as well in the same. Now apply the message, which you wanna send and now your automatic birthday wishing system is ready.

The application performs wishing at sharp twelve, which will definitely impress your friends.

You can also ignore some of your friends by using this service, and hence no message would be posted on the facebook wall of them, when their birthday arrives. I hope, from now onwards you won’t be having any need to remember your Facebook friends birthdays.

People often have some questions like, “How to do Android 2.2 USB Reverse Tethering” or “How to Share the PC Internet Connection with android phone via the USB cable” etc.

Well, I have up-graded my Nexus-1 to Android version 2.2 recently.

Android version 2.2 includes USB Tethering by which a Computer System can share the Internet connection of the phone.

This is great for those who just want to access internet via their mobile phone, but what, if you want to use your Computer’s Internet Connection onto your Mobile Phone?

This is really ridiculous, as the phone accesses internet for lot of events, and there is no option of using internet from the Computer by default.

So what to do, if you have an unlimited and high speed internet broadband connection at home but you won’t be able to use it on your android phone. Ultimately you will have to spend a few extra dollars to get a separate mobile internet connection.

But here is a way to access the Computer’s internet connection from your android mobile phone.

I think it will take a little time to me, to create an app to do this automatically!

Well, till then you can follow the below method, for which the Requirements are:

For Linux Users: Nothing to do in this step,
For Windows Users: Install the USB drivers by the Android SDK

Onto the Nexus-1: Start USB Tethering after connecting the USB wire with your Computer. You will probably get the latest interface of the network.

Visit here for setting-up the bridges

And, if you are on windows you will need to Bridge two interfaces of network.

Now setup your phone’s usb0 interface. You have 2 choices:

1. Either execute the following command,

2. Otherwise, type this in your phone’s root terminal :

Now you can connect and access the Computer’s Internet broadband connection on your mobile phone.

Confirm it by opening www.tipsring.com

To stop the usb reverse tethering, first-of-all, unbridge the your computer’s interfaces,

Then unselect the USB-Tethering onto your phone.

You must have Windows XP SP3, as the driver will not work on Windows XP – Service Pack-2 (You will get this error while installing, Code-10 – Cannot Start Driver).

But as many of the folks which are using facebook, promote them by their own, and hence NetworkedBlogs is not of much use now.

Here is the method to delete the blog from NetworkedBlogs :

Visit the application’s page, and hit on your “Profile” option. Now,

You can Subscribe to the free e-mails/feeds of TipsRing, to learn more tricks about the Facebook marketing.