The Biggest Cricket championship, ICC Cricket World-Cup 2011, is going to start on February 19, 2011. There will be 14 countries participating in the ICC Cricket World Cup 2011, which will be played in India, Bangladesh and Sri Lanka. Here is the list of playing countries, 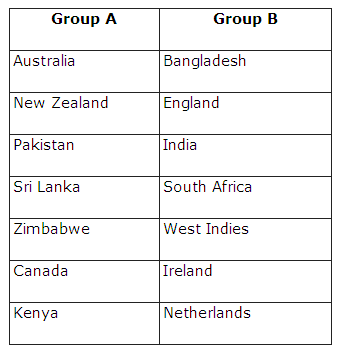 As you can see from the above table, there are two groups.

Each team in each group will play with the remaining teams and from each group, four top teams will will be selected for the quarter finals.

Final match for the Cricket World Cup 2011 will be played at Wankhede Stadium, Mumbai, Maharashtra (on 2nd April 2011).

Here is the list of a few websites which are providing free streaming of Cricket World Cup 2011,

You can definitely see your expertise within the work you write. The arena hopes for more passionate writers such as you who aren’t afraid to mention how they believe. All the time follow your heart.